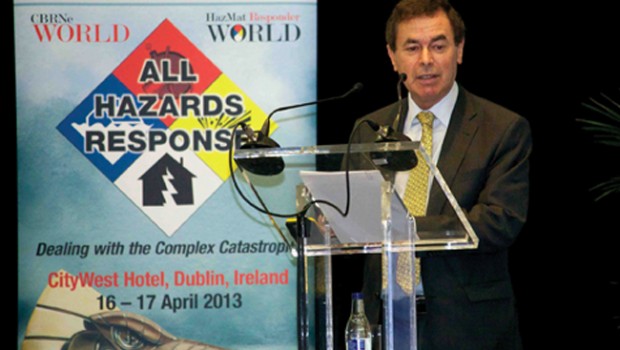 Committed To Security, Contributing To Industry

Lieutenant Colonel Ray Lane, Officer Commanding Defence Forces Ordnance School, explains the background to the recent CBRNe conference in Dublin and how the defence establishment can contribute to research, development and innovation.

CBRNe World is a private company with a global footprint. They are the leading exponents of information exchange for the CBRNe1. community – military, civilian, scientific, academic, health and environment. CBRNe World personnel attended the Ordnance Corps exercise “Contained Freedom “in Dublin Port in 2011. This was a multi-agency exercise built on lessons identified from previous Ordnance Corps led exercises dating back to 2006. CBRNe World formally requested to hold the “All Hazards Response Conference 2013” in Ireland. The conference was badged by the Defence Forces, Enterprise Ireland and the Irish Security Research Network and was also nominated as a “Gathering” event. This event fitted perfectly with the Minister for Defence’s Ministerial Foreword to the Strategy Statement for Defence 2011 – 2014, which stated:

“I am determined to further the role that Defence can play in restoring our economy. I believe that there is potential for private sector businesses to collaborate with our Defence Establishment in the area of innovation, research and development, business start ups and job creation.”

To this end the Government gave approval to the Minister of Defence and the Minister for Jobs, Enterprise and Innovation for Enterprise Ireland to become proactive in these key areas.

Background
In recent years the world has witnessed a series of devastating crises and disasters – 9/11, the Beslan School Siege, London and Madrid bombings 2004/7, the Asian tsunami and subsequent explosion at the Fukushima power plant. The ‘All Hazards’ approach is to apply a comprehensive strategy to the problem, to bring the necessary skills sets and materiel together in a timely and coordinated response to deal in a holistic manner with a crisis. The objective of the conference was to provide a hands on, learning experience by seeking to demonstrate how smart CBRNe capabilities should be deployed.

The conference was opened by Minister of Defence, Mr Alan Shatter TD, who detailed the development of CBRNe expertise since 2001. He also highlighted that Ireland’s priorities during the EU Presidency include the development of capabilities in support of the Common Security and Defence Policy and to  maximise opportunities for Irish Industry.

There were many interesting and thought provoking briefs throughout the 2 days. Those on the explosion at the Fukushima power plant and the brief on the Escondido Bomb Factory were of particular interest. Lt Col Lane briefed on the development of the Defence Forces CBRNe Improvised Device render safe capability since 2001.

For the All Hazards Response Conference 20I3. The Defence Forces National CBRNe response team, UK Hazardous Area Response Team and Paris Fire Brigade came together as “All Hazards” multi–agency response, configured to meet the scenario developed for the conference.

Scenario
A realistic Exercise Scenario was presented that included the discovery of a vehicle borne chemical agent device in a high security area that required an All Hazard multi-agency response to deal with the threat. 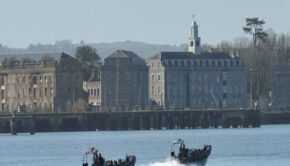 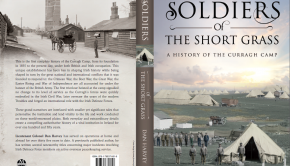