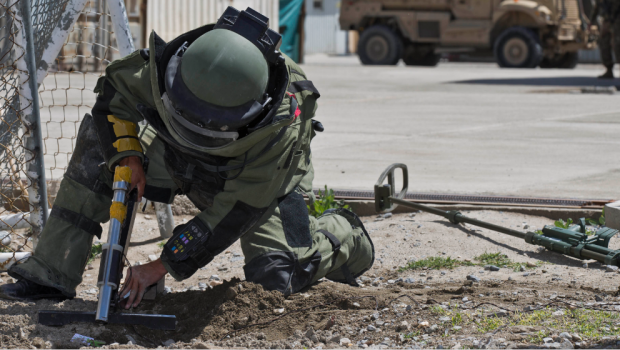 The Defence Forces are helping to build a robot which will retrieve vital forensic information in the event of a ‘dirty bomb’ or chemical attack. It’s one of a number of initiatives the army is currently collaborating on with universities and the private sector to make itself not only more hi-tech but also a revenue generator. The Defence Forces are already the first military force in the world to be awarded the prestigious ISO 50001 for energy efficiency and they are pursuing a host of innovative ideas.

The army now forms part of a successful consortium building a remotely-operated mobile system that can detect and collect forensics in the aftermath of a bomb attack while keeping the crews at a safe distance.
The project is set to receive €7 million in funding with partners from the National University of Ireland, Italy, Germany, Spain and Portugal also working on it. One of the reasons the army was selected was for its acknowledged expertise in bomb disposal and it runs training course annually on bomb disposal techniques which are attended by military personnel from around the world. Through collaboration with Defence Forces Reservists, who work in high-tech industries, the army has developed the Network Enabled Operations concept for their ISTAR (intelligence, surveillance, target, acquisition, and reconnaissance) unit which was praised by senior military officers in a number of countries for its innovation.
This is an extension of technology which was developed by Irish troops who form some of the most technologically-advanced military units in the EU. Forward ground troop units carrying laptops, cameras on their helmets and webcams can relay instant information about enemy positions to commanders back at headquarters through secure 3G/4G networks. This gives commanders a serious edge in responding to threats and the concept is being advanced with a plan to put cameras on the outside of tanks, armoured vehicles and troop carriers which would allow those inside to get a 360 degree view on their personal visor headsets or computers inside to counter attacks.

It is understood the Army is looking at simulation systems would be used to replicate firing ranges, but would save on bullets and they could be enhanced to provide virtual reality scenarios in war games.The Naval Service initially stole an advance on the army with collaborations with the private sector and researchers at IMERC (Irish Maritime Energy Research Cluster), but the army is catching up fast.The Defence Forces have confirmed the army is working with many of the country’s premium research centres.

Originally published in the Irish Examiner