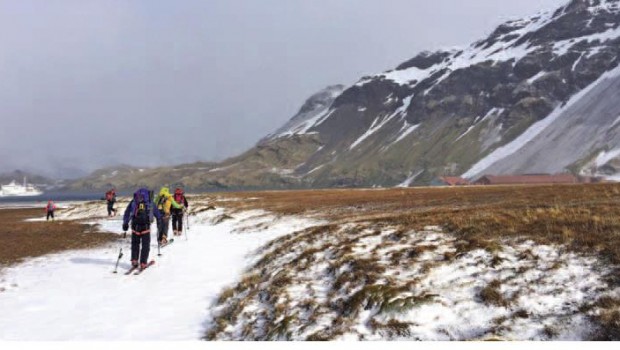 Lieutenant Sinéad Hunt, from Dublin, was one of three people selected to take part in the Inspiring Explorers Expedition by the Antarctic Heritage Trust, an organisation that works to promote the legacy of Antarctic explorers, 2015 is the centenary of Ernest Shackleton’s Imperial Trans-Antarctic Expedition. The three traced the steps of the famous explorer and his two colleagues as they penetrated and traversed the forbidding interior of the remote Southern Atlantic of South Georgia to complete a remarkable rescue mission. Lt Hunt reports for SIGNAL.

A blizzard rages outside our three tents, violently shaking their delicate lightweight lining as we lay inside questioning the reinforced strength of their dome structure. My colleague James said that the sound effect experience was as close to being inside a rocket re-entering orbit as he could imagine. Luckily this storm did not quite propel our camp into orbit, but it was still an experience to never forget! Relieved, I once again thought how brave and fortunate Ernest Shackleton, Tom Crean and Frank Worsley were to endure this crossing without the luxury of shelter, and to succeed.

The Mission & the Team

At no point did I question what were we doing there. We were an expedition team selected to retrace the Shackleton crossing of South Georgia Island by the New Zealand Antarctic Heritage Trust, to commemorate the centenary of the original crossing and to learn and inspire the spirit of exploration. The original crossing was undertaken by Sir Ernest Shackleton, Tom Crean and Frank Worsley as part of the final rescue efforts for their ill-fated Endurance expedition. After spending almost a year camped on drifting Antarctic sea ice, watching the Endurance sink, 22 men waited marooned on bleak, remote
Elephant Island while a crew of six sailed the James Caird lifeboat 800 Nautical Miles to South Georgia Island in search of help. They landed on the South coast of the Island and three crossed the formidable, unchartered terrain to the North coast in the hope that Whaling Stations here would still be operating late in the season.

Three of us were chosen from over two hundred applicants. James Blake, an anglo kiwi cameraman, possessed a strong spirit of exploration and adventure like Shackleton. Having previously spent a season working on the conservation of Scott’s hut in Antarctica and successfully rowed the Tasman Sea from Sydney to Auckland he was very much aware of the challenges and rewards of working with small teams in isolated environments. Tom McTavish, like Worsley, is from a rural fishing village in New Zealand. Tom is a distinguished Marine Biologist and accomplished skier: he has ski descended the North Face of Mont Blanc and ski toured the Haute-Route from Chamonix, France to Zermat, Switzerland. I was selected based on identifying with Kerryman Tom  Crean as he also had a military background,
serving in the Royal Navy. Crean’s ‘indestructible’ nature was demonstrated through extraordinary exploits on three polar expeditions.

His loyalty, toughness, courage and optimism attracted both Scott and Shackleton to request his presence on their expeditions. I am by no means comparable to my hero Crean, but through my training and career as a Junior Officer I continuously strive to meet the Defence Forces values of honesty, integrity, physical and moral courage and loyalty which I feel epitomise his character. I have a strong background in navigation and technical mountaineering which has been fostered through my training in the Cavalry Corps and the Defence Forces Association of Mountaineers.

My ISTAR (Intelligence/Surveillance/Targetting/Acquisition/Reconnaissance) and technical communications experience was held in regard by the trust and they challenged me to put this to use in tracking our crossing. I used an iridium satellite device which marked our position every ten minutes and transmitted this data every 30 minutes to Google Earth satellite imagery on a live tracking blog webpage. Through this device I could also update Facebook posts and I sent my first tweet ever from the Murray Snowfield! The ability to connect on Social Media from a place so isolated even helicopters can’t access was somewhat incogitable. The completed blog can be viewed at: https://my.yb.tl/aht2015.

We were accompanied on the crossing by the Trust’s Executive Director, Nigel Watson, and led by two professional, internationally qualified mountain guides, Sean Brooks and Kevin Nicholas.

After three weeks of preparation training and outreach focus in New Zealand, the team departed for South America. The expedition sailed from the Falklands on 17 Oct 2015 and three days later, out of the mist ahead, appeared South Georgia’s King Haakon Bay. Shackleton and crew found a welcoming cove in a storm here, after the relief of sighting South Georgia in May 1916. Luckily we did not experience the same stormy seas and successfully landed at Peggotty Bluff to commence our land crossing on skis.

Over 50km we experienced a true sense of isolation in the vast, glaciated and mountainous expanse. We were completely self-sufficient, including self-rescue and emergency planning should it have been required. On our final leg to the whaling station of Stromness we were again hit by the harsh and inhospitable weather South Georgia is renowned for. Bracing gusts of wind over 40 knots, in white-out conditions, we descended to the bay where Shackleton, Crean and Worsley found the Norwegian whalers and succeeded in their search for rescue.

In a clearing we viewed the old abandoned whaling stations and the sight of our ship in the distance marked the end of our three day crossing. I will be forever grateful to the New Zealand Antarctic Heritage Trust for this opportunity of a lifetime and their important mission to conserve the legacy and expedition bases of Scott and Shackleton.

The level of support the Defence Forces offered this expedition, from approving my participation to providing a valuable communications platform for outreach, was greatly appreciated by the Trust. I would also like to express my gratitude to all in the Defence Forces for their enthusiasm and encouragement in this challenge. It was an experience which only increased my admiration for the achievements and courage of Ernest Shackleton, Tom Crean and Frank Worsley. 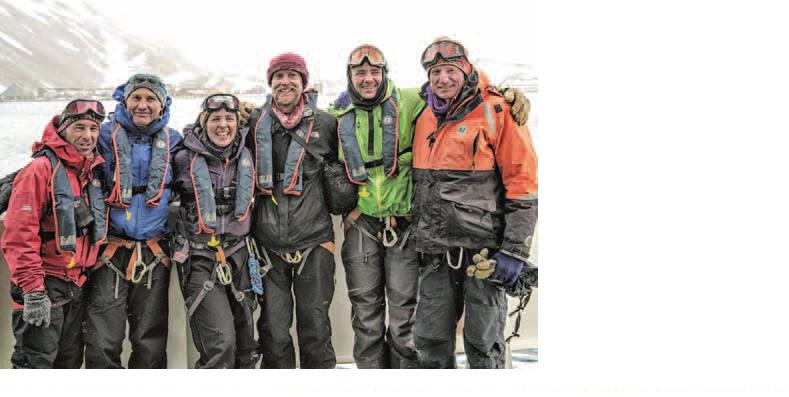