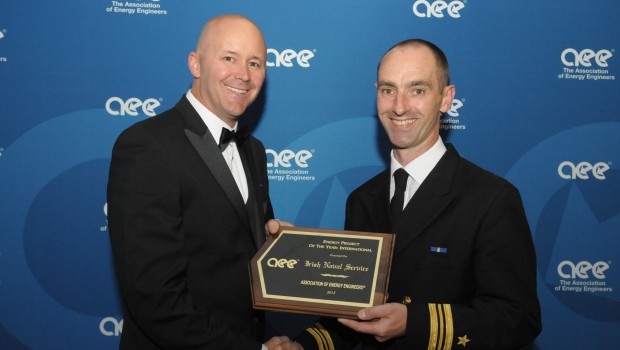 In September 2013 the Irish Naval Service (NS) received the International Energy Project of the Year awarded by the Association of Energy Engineers (AEE)¹. The award, presented at the World Energy Engineering Congress in Washington D.C, recognised international energy projects that either presented a first-of-a-kind approach in the country where it has been implemented or were more conventional in nature but have achieved significant success. The Naval Service (NS) entry was based on its Energy Management System (EnMS) which has led to significant energy, cost and emissions savings since its implementation.

Later the same year the Sustainable Energy Authority of Ireland (SEAI) awarded the NS the SEAI Sustainable Energy Award (Public Sector Category) for its EnMS which enabled the NS to achieve significant savings in what is a very harsh and demanding operational environment, while successfully balancing its legal and operational requirements. While the recognition is always welcome, its real value is that reflects external recognition of the NS’ successful implementation of its EnMS and the significant savings achieved as a result. The key to this was the certification of the EnMS to the International Energy Management Standard, ISO 50001.

The Irish Naval Service, the maritime element of the Irish Defence Forces, is the State’s principal seagoing agency with a responsibility to meet contingent and actual maritime defence requirements. The NS carries out Maritime Defence & Security Operations within Ireland’s maritime domain (an area of approximately 1,000,000 km² of statistically some of the most hostile sea conditions in the world) and beyond.

The Naval Service maintains a 24/7/365 presence in our maritime area of operations and its activities at sea enhance the safety and security of our citizens ashore. The Naval Service ensures the freedom of navigation and protection of international trade by sea, on which Ireland as an island state depends. It is actively involved in the international effort against narcotic smuggling, working closely with An Garda Siochana, the Customs Service and the Maritime Analysis Operations Centre (narcotics) MAOC(N) in Lisbon. The detention of the yacht Makayabella, seizure of € 80 million of Cocaine and subsequent award of a 16 year prison sentence to the yacht’s master was a significant success for the NS.

Additionally the NS operates the National Fisheries Monitoring Centre and strives hand in hand with the Sea Fisheries Protection Agency to safeguard and manage our rich fisheries for current and future generations’ sustainable exploitation. The NS with the AC is assisting OSI in the Base Lines Project which will map Ireland’s sovereign claim to the seas around our island for generations to come.

In 2007 the NS commenced the process of procuring a new generation of Offshore Patrol Vessels (OPVs) to cover extended areas of international sovereign responsibility and increased requirement for rapid response activities. With the future deployment of these OPVs, coupled with the start of the Irish economic downturn, and fuel price uncertainty (the price of crude oil approaching $140 per barrel), NS command recognised that increased fuel costs, decreasing budgets and increased areas of operational responsibility potentially conflicted. Faced with these circumstances, and on completing analysis of the options available, the NS responded by targeting improved use of energy  resources, placing energy efficiency as a cornerstone of its day to day operations.

Further to this, another imperative became reality. In response to European Directive 2006/32/EC to increase energy efficiency, the National Energy Efficiency Action Plan (NEEAP) was published in 2009. The relevance of this was that it resulted in a Defence Forces target of 33% reduction in absolute energy consumption to be achieved by 2020. As Marine Gas Oil (MGO) consumption formed approximately 90% of NS energy usage (Fig 1) and 35% of DF energy consumption (Fig 2), the NS placed its greatest focus in MGO efficiencies.

A strategic assessment of NS future energy requirements, taking into account the projected vessel type changes highlighted to Naval Service command that the NS needed to migrate from the traditional approach to energy management – a capital intensive, project based approach focussed on electricity and thermal fuels – to a more operational management based approach. Thus there existed a requirement to reduce MGO related energy consumption ahead of the commissioning of the larger new OPVs in order to mitigate the impact that their increased energy requirement would have.

The process of implementing energy efficiencies in order to reduce fuel consumption and associated costs began with analysing the options available. While tools to monitor energy efficiencies had been available, energy management frameworks had not been discussed formally as a concept in the maritime sector. Thus the NS looked to the commercial sector for guidance. Irish Standard (IS) 393 had been applied for a number of years as a national energy efficiency standard. Indeed, Ireland was one of the first countries worldwide to implement such a standard. This had subsequently been replaced with EN 16001, its European equivalent. It was also clear the significant work had commenced on ISO 50001, an energy management standard which ran along similar lines to ISO 9001, one major difference being that its focus was on actual energy efficiency and less on the associated paperwork requirements.

Early stage program development commenced with the initiation of Certified Energy Manager (CEM) training for identified key engineering personnel. A key output of the CEM training was the recognition among participants that the most effective approach to energy management for the NS was a structured properly resourced approach. Further to this any such system required senior command buy-in if it was to succeed.

The NS then put in place a structured energy management framework of the then developing ISO50001 and to undertake formal training on this standard. This further training was designed to allow personnel to properly develop the ISO 50001 structure and implement a strategic approach across the organisations operational and engineering disciplines.

A key change in outlook at this point was that the energy management program needed to be led by Naval Operations Command (NOC) as the NS Significant Energy Use (SEU) was ships fuel (MGO). As stated, this accounts for approximately 90% of NS energy usage. As Patrol Vessel movements are controlled by NOC, it followed logically that any meaningful implementation of energy reduction would have to be led by NOC.

An energy manager was subsequently appointed and a cross functional energy team the NS set about completing an energy review or gap analysis². The team did this by using in-house personnel assisted by external expertise, developing a more structured understanding of the elements impacting the energy use of the organisation. This allowed functional performance indicators to be developed for all areas of operation.

It was clear at an early stage that it was crucial that energy management could not impinge on operational requirements. Further to this, the system was to be output driven and not a paper exercise. This challenge was embraced by the NS Energy Management Team (EnMT) which set about developing the structures to make this happen. The implementation team was fully supported by higher command, which reviewed recommendations at each stage of development and put into place a number of operational and support directives that underpinned the work of the energy team.

The gap analysis highlighted a numbers of areas of interest:
• A big bonus from the viewpoint of energy data measurement and reporting lay in the fact that as a result of maritime regulations and NS requirements, the NS possessed a rich array of data from which to analyse past and present performance with a view to setting future targets.

• Difficulties were encountered in the identification of energy targets associated with operational management in an area where there lay no precedence to fall back upon. Sound engineering judgement coupled with discussions between key operations personnel, together with historical records and manufacturers data led to targets that were seen to be achievable and agreeable to all parties.

• Lack of custom build measurement and reporting systems for marine applications in fuel consumption measurement. The range of ships and fuel consumption (2Tonnes/day up to 2Tonnes/hr), coupled with the different shafting arrangements for the various ships made this area not as straightforward is it would initially sound. The team developed a multi-pronged approach depending on the age of the vessel and projected future life, leading to a measurement system being purchased for installation and development on the OPV class, the development of a standalone system for the LPV and CPV classes and the integration of a manufacturers developed solution into the control and instrumentation systems of the newer vessels.

The completion of the structured implementation of the EnMS was marked with the recognition by an external certification body³ of full compliance with ISO 50001 but more importantly by a clear increase in energy efficiency, reduction in energy consumption and cost to the NS and the Defence organisation.

The structured energy management system is lean from an administrative perspective ensuring that the focus is on energy and not bureaucracy. The benefits seen to the organisation from this approach to date have been:
• Reduced energy consumption of 146 GWh;

An additional result which will act to reinforce the ability of the NS EnMS to further increase efficiencies into the future is the integration of significant energy efficiency measures into the build of the P60 class OPV’s. Two of these represent a significant advance. Firstly, the vessels utilise a hybrid propulsion system which allows the use of the vessels two 5MW diesel main engines (ME) to achieve 23 Knots or alternatively two 350kW shaft propulsion motors which allow the vessels to achieve 10 knots. The latter is significantly more economical. At the slower speed stability is ensured through the addition of tank stabilisation to augment the standard fin stabiliser system. Secondly, the P60 class vessels employ a state of the art measuring and reporting system which ensures that real time fuel efficiency information is available to the ships watch-keepers. This will allow for timely decision making vis-à-vis fuel efficiency. As these patrol vessels will have a life span of 30 years, a significant step has been taken towards enhancing future fuel efficiency.

As the majority of NS energy consumption is derived as a result of operational requirements, a situation is presented whereby it becomes difficult to set meaningful targets for units as planned events can give way to unplanned events as the operational imperative requires. This provides a difficulty regarding the successful meeting of the Government set 2020 energy reduction targets. Thus there is a requirement to separate operational energy usage and that related to utilities. This is equally relevant to all aspects of the Defence Forces. Thus, the NS is continuing to develop its EnMS to ensure energy measurement and reporting vis-à-vis its targets is done so in a manner which is reflective of the operational reality. This remains a significant challenge facing the NS and DF in the immediate future.

As the twin challenges of decreasing budgets and generally increasing fuel prices continue, the NS will continue to refine its energy management system to mitigate the effects of these challenges to enable the NS to meet its statutory requirements. While the NS EnMS is a component of the Defence Forces EnMS at present, it will become further integrated later this year when the NS ISO50001 certification will be integrated into the scope of the equivalent certification applying to the wider Defence Forces. While energy efficiency will never be the most important aspect of any Defence Forces planning, it will become increasingly important to take it into account as efficiencies made will reduce costs which may then be reinvested into capitol or training requirements.